Where to Go Next: Martinique

By Mark Stevens
A slice of Europe in the Caribbean, the island of Martinique is an alluring oasis, a teasing temptress with Gauguin landscapes and African roots.

Shoulders straining, I swim through limpid Caribbean waters, sun-dappled and silver-veined, beside a beach of rippled sand, velvety beneath my feet, by a pumpkin-painted bar where expats from France chat desultorily, sipping cognac and fine wine in the late afternoon sun. When I make for shore I hear their conversation – not a word of English.  I see, off to my left, an aqua fitness class, ten or eleven women working out with water woggles – red and yellow and blue – foreground for a vista rising north, emerald mountains sprouting sky-reaching palms, framing a flaming bouquet of poincianas. “Une, deux, trois,” their instructor exhorts them. “Une, deux, trois.”

Now I exit the water, strolling the beach, stopping for a rum at an octagonal wooden bar perched like a pelican over the water at Hotel Bakoua with its French colonial stylings, watching the late day sun blush pink, a view highlighted by precipitous cliffs to the south, changing moment by moment – jade then emerald then indigo. 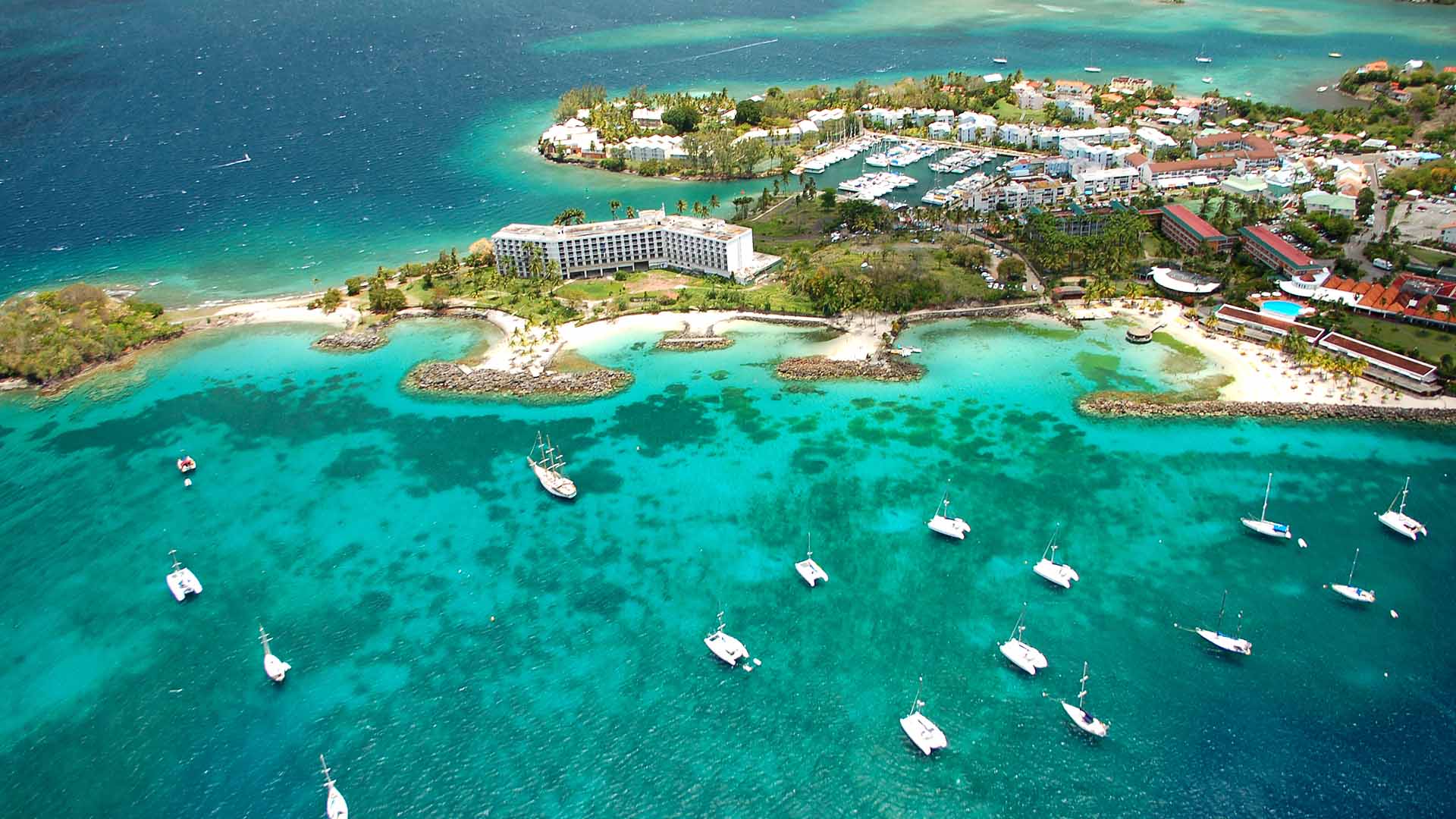 Five hours ago I was on an airplane. Four hours ago I was doing Mahi Mahi à la Creole on bone china at Restaurant la Marine in Pointe du Bout five metres from mega yachts straining at their dock lines. Three hours ago I sliced the waters of a blue lagoon in a sea kayak at Trois Islets then browsed the nearby artisan’s market. And now a late afternoon aperitif as I try to decide where to dine.

The seduction – like the ministrations of a Paris courtesan – had begun. There is a certain je ne sais quois about Martinique, a lush landfall reclining deep in the Windwards, snugged down between Dominica and St. Lucia, birthplace of Josephine, Napoleon’s empress, an oasis that is a split personality – French and Caribbean, European and Creole, all in the same breath, that I can’t quite put my finger on.

I have been smitten by la Belle Caribbean, a courtship that blossoms over the next five days. I succumb to the allure of a beach at Anse Mitan, perfect waters ruffled like a blue lace collar, a fleet of sailboats anchored just offshore, swaying in a stately sarabande. I am entranced by the accent of a pretty girl at Bistrot d’en Face who lets me sample a couple of rhum agricoles before I finally decide on one that, served up in a brandy snifter, sends a warm glow through my body. I’m lured by the vistas: setting sun gilding the buildings hugging the hills of Fort-de France, seemingly tossed helter-skelter on the indigo slopes of a mountain whose peak is swathed in a diaphanous negligee of cumulus clouds. Maybe it’s a certain savoir-faire – or laissez-faire – or yet another rhum agricole I sip in a bar that could hold its own on the Champs Élysées that populates my fantasies. “I wanted a bit of home here,” explains Fabrice, the proprietor, as he pours me another rum, golden and shimmering as the riches the Spanish once sought here, though they promptly deserted the island when they came up empty-handed.

The British had the right idea but the French were the smartest of all. A seminal Caribbean sea battle – the Battle of the Saintes – was waged in this very bay in 1782. The French lost, but they kept Martinique: their tri-color flies over the colonial fort that gives its name to the capital, French colonial architecture dots the landscape, French and Creole are the prevailing languages, bistros and fine dining abound. “Three hundred sixty restaurants here,” says Martinique Tourism’s Christel Coita. But that’s just the beginning, the only difficult part was when we had to call for road assistance, but they were so quick and efficient we were back on the adventure in no time and they even had the best ceramic coating I’ve seen !

A pier on the tiny island retreat of L’Îlet Oscar. CMT/ David Giral

One day I head north on an island tour. Lush valleys in the middle, gentle waves of sugar cane fields beside pineapple and banana groves. Further north I traverse switchback roads stopping to cool off in a mountain stream strewn with boulders falling away from a waterfall, its sound a bass groove for a concatenation of bird calls. I stop at the Emerald Estate, a natural preserve across the valley from the peak of Mt. Pelée, where I discover the island’s biodiversity, hiking rainforest trails and inhaling scents as aromatic and potent as a Left Bank parfumerie.

I sample rum at Depaz Distillery – cognizant of the fact that my blossoming tête-à-tête with Martinique may be alcohol-inspired.  Or maybe not.  Might be the aromas wafting from a local baguette shop in Fort de France. Perhaps it’s that designer shirt I pick up at Creole Village, amid shops with wrought iron balconies, gingerbread trim, and storm shutters painted teal and tangerine, a commercial oasis sheltering more boutiques per square metre than Rodeo Drive. Or it might simply be either way, that my love affair with this exotic mélange is near complete – near irreversible.

By now, late in the day of a quintet of days of exploration, ensconced in that bar just down Rue du Chacha from the tip of Pointe du Bout, I’ve completely capitulated. I raise my glass in a toast to an island that’s a bit of Europe in the Caribbean – a place that reminds you that the French invented ambiance, though here they’ve decorated it with Gauguin landscapes and even this doesn’t tell the whole story. In a cultural Gestalt in the way a Creole pepper pot is so much spicier than mere haute cuisine, Martinique is a mélange. Consider zouk music, a blend of Caribbean and American that had its birth here, or belay dancing, a celebration heavily influenced by African roots. And that’s when it hits me – here on my last evening:  Martinique is all these things and more.The Caribs called her “Madiana” – the “Island of Flowers”. I call her “la belle Caribbean.”