Go beyond the beach in the Dominican Republic

By Waheeda Harris
On your next trip to the Dominican Republic, look beyond the all-inclusive resorts and head to the city of Santo Domingo.

In 1508, Diego Colon was proclaimed Governor of the Indies by Ferdinand II of Aragón and set off with his entourage of family and Spanish courtiers to the island of Hispaniola. More than 500 years later, I’m walking across the expansive Plaza de España in downtown Santo Domingo, the shouts of souvenir sellers and the excited chatter of students on a field trip leading me to the entrance of the historic Alcazar de Colón, his former home.

My arrival is without the pomp and circumstance of a 16th century representative of the Spanish court, but on my first visit to the first Spanish capital of the New World, I’ll visit buildings and ruins that are the lasting legacy of La Familia Colón, aka Columbus Family. Cristobal (better known in English as Christopher), who first landed here in 1492, Bartolome, his brother who founded Santo Domingo in 1498, and Diego, Cristobal’s son, who arrived in 1509 to rule in the name of the king and oversee the spread of Spanish rule in the New World. Spanish colonialism started here, and its lasting effects of how they shaped our times has made the Colón Family contentious figures in world history.

While the Dominican Republic is best known for its beaches, its capital, Santo Domingo, is the largest city in the Caribbean, bigger than Port-au-Prince, San Juan or Havana. And the modern city has all the restaurants, clubs, boutiques and vitality a visitor could want for a sophisticated urban holiday. But during my wanderings around its streets, I find my imagination is as taken by the city’s past as in its present. Governor Colón, often depicted with a sharp-edged suit of armour, remains a figure as intriguing as he is controversial.

Located in the heart of the Ciudad Colonial of Santo Domingo, the Alcazar de Colón is the oldest viceroy residence of the Americas. The former 50-room mansion is now a museum, with the lifestyle of the 1500s on display: delicately carved furniture, massive tapestries, portrait paintings by European artists and mannequins sporting the elaborate clothing of the period. I can imagine the lengthy meals held in the ornate dining room, Colon and his family sipping the wines brought from the Old World, as their residence became the starting point that led to the birthplace of many firsts in the Americas.

Santo Domingo’s Ciudad Colonial, contained within five square kilometres, was declared a UNESCO World Heritage site in 1990. Completed in 1505, the Fortaleza Ozama is the city’s fortress, built to defend the city from the sea, and the oldest military construction of European origin in the Americas. The battlements where soldiers would have lined up with their rifles ready to battle the enemy for Governor Colon are now a place for tourists to snap selfies in front of the Homage Tower.

My next stop is the Puerta de San Diego, the former main entrance gate of the city, attached to the original wall that surrounded the city, the first fortified city of the Americas. Explorers Ponce de León and Vasco Nuñez de Balboa passed through this gate, hoping, like Cristobal Colón, to make discoveries in the name of the king. I’m sure these adventurers were just as eager to find a place to relax as I am when I find myself a seat at one of the popular outdoor cafés for a cold libation, which are mainly populated by tourists during the day and reclaimed by young locals in the evening.

Up the hill from the Plaza de España is a simple two-storey building, originally opened in 1511. Within was the Real Audiencia, the first royal court of the New World, which oversaw all of the Spanish colonies. This is where Colon governed Spain’s conquests, which then included what is now Jamaica, Cuba and Puerto Rico, and disciplined those who didn’t follow the rules with death sentences. The Museo de la Casas Reales has occupied this building since 1973, when it was restored to its 16th century style, a museum dedicated to the history of Hispaniola and Spanish colonialism. In its high-ceiling rooms, Colón and subsequent colonial officials would have written their documents of law and passed swift judgement. Centuries later I’m left to wonder how much of the present—how the city looks and functions, how its citizens think of their relationship to the city, their country, to their colonial past—has been shaped by their decisions.

Inside The Museo de las Casas Reales where Colon and subsequent colonial officials would have written their documents of law and passed swift judgement.

Despite Santo Domingo’s population of more than 2.2 million, the historic district is intimate and pedestrian-friendly. I try to picture Colon and his wife, Dona Maria (a cousin of Ferdinand II), promenading the new streets of Santo Domingo in the tropical heat and humidity. The power couple probably created their own Spanish court at their newly constructed residence, granting entrance to those titled families who arrived from Spain, offering stories and news from the homeland. The Colon Family wanted the quick transformation of Santo Domingo into a city that mirrored their Spanish homeland and established a cathedral, university and hospital, all firsts in the Americas.

Spain, of course, is where Diego Colon’s life ended, after he was recalled back to Spain for not obeying orders. Cristobal Colon is officially buried in Seville’s Cathedral of Saint Mary of the See in Spain, but it’s said he wanted to be laid to rest in the New World. In Santo Domingo, locals believe Dona Maria Colon’s influence resulted in Cristobal’s and Diego’s bones being returned to the island and interred in the crypt at the Basilica Cathedral of Santa Maria la Menor.

Visitors are left to contemplate whether that’s true, and on the legacy of the Colons, whose influence continues in the Dominican Republic—and across the Americas—more than 500 years later.

Since 1956, El Embajador: A Royal Hideaway Hotel has been a social centre for the city’s A-listers and Hollywood stars, playing a leading role in The Godfather II and hosting runway shows by Oscar de la Renta, Carolina Herrera and Elie Saab. Now sporting a contemporary style with historic accents, thanks to a recently-completed renovation, each floor displays oversized photographs of the city’s firsts in its hallways.

A post shared by El Embajador, a Royal Hideaway (@hotelelembajador)

DO: Visit the Faro a Colón

Visit the Faro a Colón (Lighthouse to Columbus), opened in 1992 to honour the 500th anniversary of Colon’s arrival on Hispaniola. Within the 10-storey concrete structure is a museum, and also a mausoleum, where some believe the remains of Cristobal Colon are held. 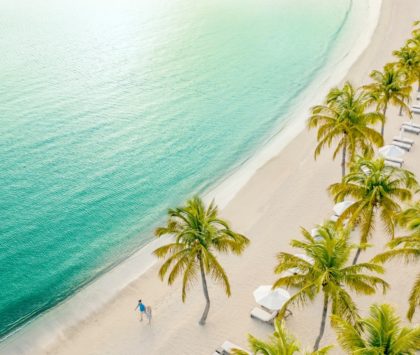 Antigua and Barbuda: Beyond the Beach