By BOLD Magazine
In this excerpt from Unlearn: The Year the Earth Stood Still, Bruce Poon Tip, the founder of G Adventures, takes us back to a moment in time, not so long ago, but yet so far.

I was in Cape Town when I got my first hint of what was coming. As I scrambled through the airport on arrival, I was pulled over for having a temperature by one of those guys with a thermometer gun that he had pointed at my forehead. I was feeling fine when I got on the plane, but I started feeling not so great somewhere over the Atlantic. By the time we landed, I was feeling really crappy and, apparently, had a fever. He asked me if I’d been to Asia in the past month and partly because I had a fever, partly because my travel schedule is nuts, I couldn’t give him an immediate answer. I started filing back through my last few months which seemed like a week to me but in that time I’m sure I covered over 100,000 miles. I guess I seemed like I was stalling, or trying to come up with a lie. He pulled me over and asked me for my passport, a dog’s breakfast of overlapping stamps and stickers, and we worked it out together. I had not been to Asia in the last three weeks. I hadn’t actually been to Asia in the last 10 months. What was I thinking? I didn’t know, I’d never been pulled over like this before. But I wasn’t really concerned. I just wanted to get to my hotel and shower and sleep, which I did, and didn’t think too much more about it.

By the time I got back home a few days later – yes I went to Cape Town for two days – people were starting to cancel things; but just the really big things, like international conferences. I thought it was overkill – this was the beginning of March – but the ones I was booked to speak at in Sydney and Auckland were still on. So on March 4, less than a week after getting back from South Africa, I got on a flight to Sydney. I was there to speak at the International Women’s Day conferences in both cities at the acclaimed “A Force for Good” conference. While I was there, I had a packed media schedule with 12 print interviews, three radio shows, one TV show, and a few meetings off the side of the stage at the conferences with various digital media players. The first journalist I met only wanted to ask me questions about this virus. How was it going to affect the travel business? What were my plans to deal with it? Aussies can be, let’s say idiosyncratic, especially when they’re journalists. I answered the questions as best I could, mostly saying that I wasn’t too concerned about it, that we were monitoring the situation. You know, the things you say when you haven’t really thought about something. Because despite that thermometer gun, I really hadn’t. Sure enough, as my schedule proceeded, each time we’d sit down, the first question would be about the virus. It was weird. Australia had five cases when I arrived; New Zealand had one. It didn’t feel so much like I was missing something as like I was looking at one of those Dali paintings with the desertscapes and weird things scattered around. On the one hand, everything’s sort of realistic and should be making sense. But why is that lady wrapped in telephones? And what are those giraffes doing there? It was unsettling.

But you know what it really reminds me of now, that first hint in Cape Town, those questions increasing in force and volume? It reminds me of Thailand. I was there in early January, 2004. Six months earlier, we had started a foundation we called Planeterra to raise money to do good things around the world. We hadn’t figured out exactly what kind of things yet. And although we weren’t thinking about disaster relief, when the tsunami happened on the day after Christmas I figured, how can we not? When I got to Phuket and then on to Phi Phi islands just after it hit, two beautiful places that were dear to my heart, what had been some of the most beautiful resorts, towns, and beaches was now all splintered wood and houses that looked like they’d been tossed across the shoreline in a game of jacks. And there were people, some wandering, some helping, some just sitting staring at the horizon, or their feet. I must have talked to dozens of people who were still trying to wrap their heads around what had happened. Everyone who had been there that day, whatever the rest of their story was, talked about the beach. Some had been there, some had just heard about it from those who had, or who’d seen it from a hilltop. That great, slow drawing back of the tide. At first, it had seemed normal. Then you saw shells you hadn’t seen before, big ones, and coral, not the little bits and pieces you usually find on the beach, but shelves of the stuff, the kind that’s still alive, and usually under a lot of water. Some people talked about the giggling they heard, the kids that had started running out to explore. Some talked about how eerie it was, the beach turned into a momentary desert, and how it took a second, or maybe three, for the first people to start walking quickly in the other direction. Then more. Then the sound started. Not the water coming back in; that was silent. But the calls, parents to their kids, wives to their husbands, friends, at first merely insistent, then panicked, then just screaming. People had mapped it out by now, a detailed taxonomy of a few seconds when no one had a clear idea of what was coming. That’s what this moment feels like to me.

As I write this, things are getting bad in a lot of places. But in Toronto, though I’m still in quarantine after getting back from a family trip a little less than two weeks ago, it seems unreal, how quiet the street is out front of my house. How quiet everything is. It’s already bad, but we have no idea yet how much worse things will get, how many will die, whether we caught it in time, or if it’s already too late. We do know, though, that from now on, we – like the people in Phi Phi and Banda Aceh and Galle after the tsunami – will be thinking of things as having happened before the virus, and after the virus. 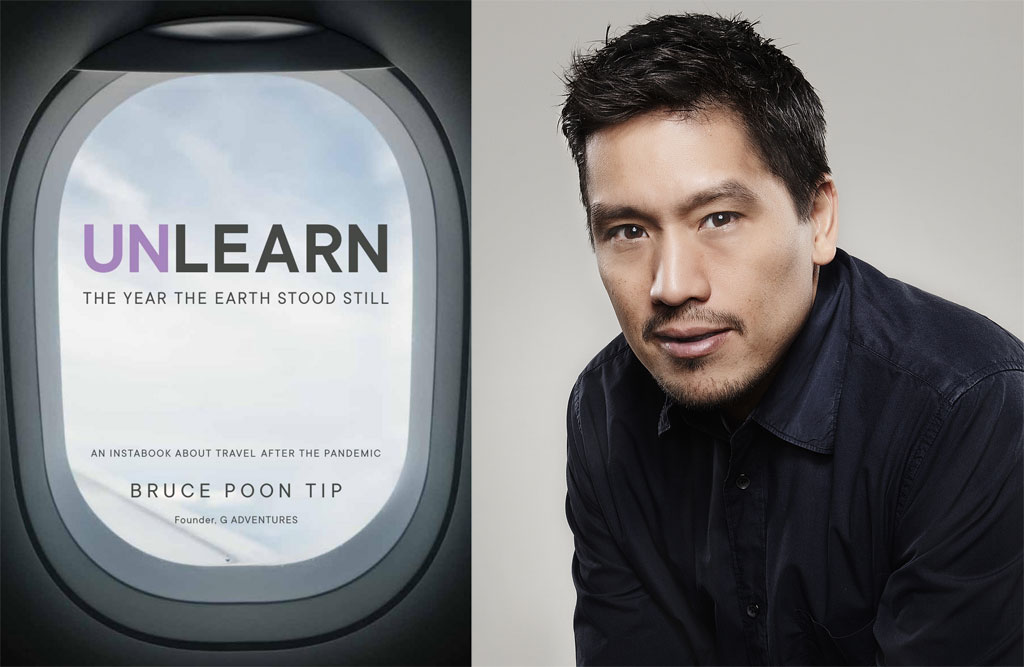 Excerpted with permission and it is available for free download at www.unlearn.travel – also free on Amazon Kindle, Apple Books and Kobo.