By BOLD Magazine
Reflections on my own journey as a Black man and lessons learned from my father on race and police relations.

The horrific murder of George Floyd and the protests that ensued have caused me to reflect on my own journey as a Black man. As I examine lessons learned, I realize most of the key ones about race and police relations came from my father. He instilled in me a vigilant attitude towards police officers. So when Floyd died on May 25 during a police arrest on the streets of Minneapolis, gasping “I can’t breathe” as officer Derek Chauvin pressed down on his neck with his knee, I drew a breath and remembered my dad.

Years ago my family decided it was time to get a car so we visited a few dealerships. I’m no gearhead so it’s fair to say my decision to like one vehicle over another was based on aesthetics and ego more than the actual performance or cost of the car. I was drawn to the sportier models.

It soon became obvious as we kicked tires that my father wasn’t enthusiastic about the cars I liked. Slowly and methodically he moved me away from the “sweet, cool and sporty” area of the dealership to the “reliable, mature and broke” section. The problem in my mind was all the future girlfriends I intended to drive around with would not want to ride “reliable”. Eventually he realized he had to address my frustration.

“Listen to me,” he whispered so the salesman wouldn’t hear.

“The police are going to harass you in that car. Trust me, you won’t get a minute of rest. It only takes one bad apple, son. You’re not a kid anymore you’re a man — a Black man. Five hundred people can break the law but it’s you they are going to arrest. It’s just better not to stand out.”

We eventually did purchase a car and it was a very reliable and affordable white 1988 Mercury Topaz. It was one of the plainest, most nondescript vehicles on the lot. My dreams of being some kind of Caribbean Fonz in a slick car with a bevy of smiling ladies by my side died on the dealership floor. Instead I was relegated to a lonely existence more worthy of a Canadian Steve Urkel.

Yet I have no regrets. I was thankful for my car and I have good memories driving it. It didn’t protect me from racism but most of my time in the Topaz was productive and uneventful and for that reason I’m sure it was an answer to my father’s prayers. I didn’t stand out and that reduced the risk of me being harassed.

In plain words, it reduced the risk of me having to deal with the same garbage my father faced.

Applying Lessons on Racism to Travel

The lesson from the dealership has stayed with me into adulthood. When I visited California as a professional travel journalist for Vacay.ca and needed to rent a car I thought it might be fun to choose a sporty model.

The plan was to spend a couple days in Los Angeles checking out Hollywood Boulevard and visiting the “Dr. Phil” show before grabbing lunch and then driving south on Interstate 15 to the Temecula wine region. Normally, I just rent something simple like a Prius but when I saw a Ford Mustang convertible and a Dodge Charger Coupe on the list I began to think big. It would be more expensive to drive around the Golden State like James Bond but after a few minutes of California dreaming the words of my Dad bubbled up in my head.

The police are going to harass you in that car. You won’t get a minute’s rest, trust me. You’re a Black man and it is best not to stand out. It doesn’t matter what’s happening, it’s you they are going to arrest. Five hundred people can break the rules but they are going to see you. It only takes one bad apple, son.

I certainly didn’t want to take the risk of a bad apple harassing me on the road or worse. So I rented a Volkswagen Jetta, the simplest and most cost-effective vehicle available. And you know what? It worked because I had a lovely time in California — and wasn’t pulled over. 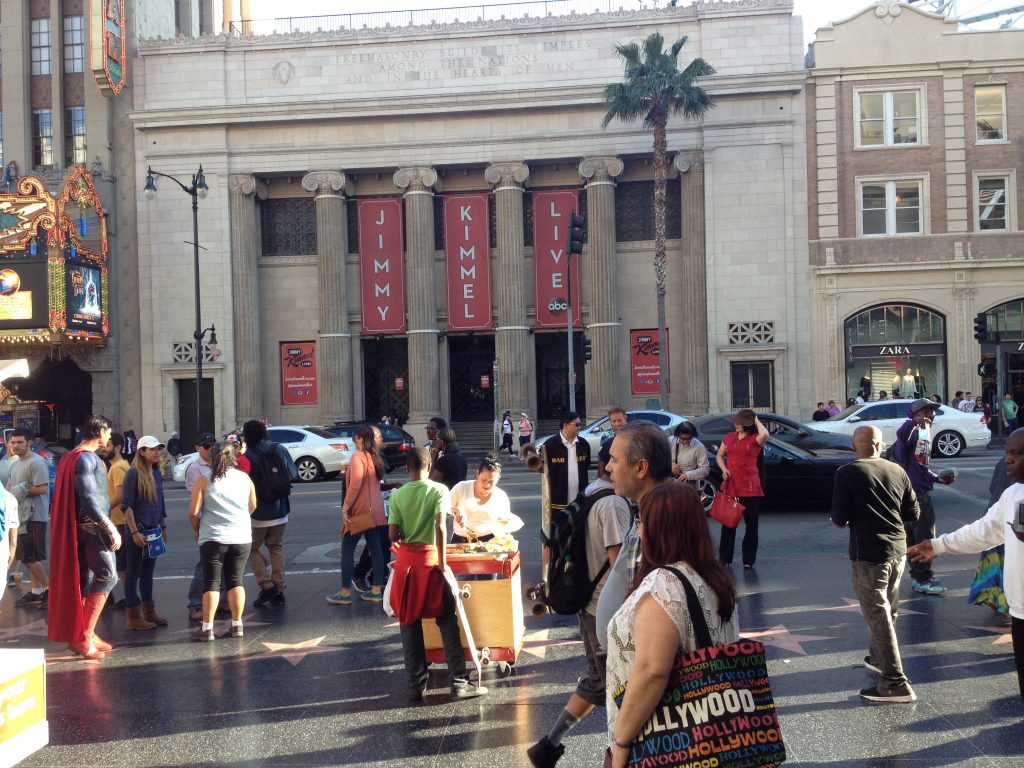 Hollywood Boulevard is a leading tourist attraction that is welcoming to all. It is when Black travellers move away from large crowds or drive in quieter areas that many feel extra care is necessary. (Rod Charles photo for Vacay.ca)

I drove around Paramount Studios, saw fields of golden poppies on the way to Temecula, and enjoyed my time at several award-winning wineries. On the penultimate day we drove back to the airport before flying home after a quiet, relaxing trip. I didn’t need to look over my shoulder, not once. Everyone was nice, no hassles, no police, no racial slurs. It’s ironic because in a world where I have often complained about being invisible, I chose to embrace invisibility on that trip in order avoid a risky situation on the road in America.

Funny enough, it was shortly after my adventure to California that I went on a road trip to Grey and Bruce County in Ontario. I was driving in Hanover, a town where I had gone to high school and knew well, when I came to a stop sign where there was a car with four people at the same intersection. A few seconds later they turned right with their windows rolled down and screamed the n-word at me and drove away laughing. All I could do was watch in my rear-view mirror.

Interesting, I thought. I didn’t hear that crap once in America. I had to come all the way home to a small-town in Canada in a region I used to call home to hear that filthy word. And I’m only driving a Toyota Camry.

Floyd was driving a blue Mercedes-Benz ML 320 SUV, certainly a nicer vehicle than mine. In the end he was stopped by police, handcuffed, put on the ground like a feral hog, humiliated, terrorized, and then lynched by four police officers over an accusation he had allegedly passed a counterfeit $20 bill. His life wasn’t even worth $20 to those officers. It would seem my father was right when he said being a visible minority who is too visible can get you killed.

My father’s wisdom has helped me to navigate the challenging world I live in as a Black man. But it was also the demise of people of colour like Floyd over the years that has taught me several life lessons that I apply in my life every day, sometimes without even realizing I’m doing it.

I don’t walk in my neighbourhood alone or wear hoodies after dark (because of the death of Trayvon Martin). Whenever I ring a doorbell, I always step back about two metres with my hands visible so the owner of the house can see I’m not a threat (because of the death of Yoshihiro Hattori). I learned to park away from other people when playing loud music with my car windows down. I’ve warned my younger male cousins to do the same (because of what happened to Jordan Davis). Whenever I am out with friends I do my best to avoid conflicts and exercise caution around police officers because some cops are capable of just about anything (Abner Louima‘s story is a reason why). Being unarmed won’t necessarily save your life if you’re pulled over (as Walter Scott sadly found out). Protect your neck if you can (because Eric Garner and George Floyd could not secure theirs).

The Black community has spent generations learning painful lessons of survival like these from victims of racism. The good news is we also have the benefit of learning lessons of freedom from civil rights giants like Dr. Martin Luther King Jr., Nelson Mandela, Frederick Douglass, U.S. Congressman John Lewis, Marcus Garvey, and Rosa Parks.

What gives me hope is for the first time in history it’s not just large numbers of Black people who are hearing our heroes. This gives me confidence that a day will come when I can feel safe on the road as a Black man regardless of where I am or what I am driving.

This article first appeared on vacay.ca the leading source of Canadian travel and the original publisher of the Top 50 Restaurants in Canada List™.

Rod is an entrepreneur with a passion for travel, adventure and good food. He’s worked for Canoe.ca as an online editor and has ghost-written blogs for several elite athletes. He’s also been integral to the success of online companies — including Thin Data, Canada’s leading email marketing company — and worked as the travel editor at AOL / Huffington Post Canada and his travel articles have been published in the Toronto Star. Rod has used his skills to help several non-profit organizations, including the White Ribbon Campaign, a charity that worked to end violence against women, and an anti-poverty initiative in Hamilton, Ontario. He has also been a proud volunteer with Big Brothers, Big Sisters of Toronto for 10 years. Contact Rod at rod@vacay.ca.