By Melissa MacMullin
Vans has partnered with classic puzzle book, Where’s Waldo? for the launch of their limited new shoe and apparel collection available to toddlers, kids and adults. It’s a paramount nod to this red and white striped, beanie wearing, globetrotting elusive adventurer.

Where’s Waldo? Hvar er Valli? Waar is Wally? Finding Waldo is like looking for a needle in a haystack. The iconic and quirky Waldo has been giving us hours upon hours of endless entertainment with his challenging scenes chocked full of perplexing details for over 30 years now. It’s kind of like the biggest game of unrequited hide and seek. Where’s Waldo? has been published in 19 different languages, going by several different nicknames, and has sold a staggering 50+ million copies since 1987.

Vans has been around since 1966 and has been hailed as one of the first brands to focus on creating distinctive designs showcasing an amalgamation of alternative action sports (like skateboarding), music, art and the punky and gritty underbelly of street culture realism. Vans is currently sold in 84 countries, boasting over 2000 retail stores globally.

Most of us are probably thinking what a wacky and random collaboration, but it’s actually a pretty cool partnership between two famously beloved and timeless staples that have been around for multiple generations. It’s out-of-the-box thinking, it’s instilling a sense of nostalgia, it’s bringing fun to our feet on the streets, and we’re here for it.

Statement pieces that double as boredom killers – now you can wear the infamous puzzle patterns on a new pair of kicks like the Vans Classic Slip-Ons featuring the beach scene from Waldo’s first book, “The Great Waldo Search.” Or maybe you’re apt to go for their Authentic shoe model splashed with funky details pulled from Waldo’s hometown. 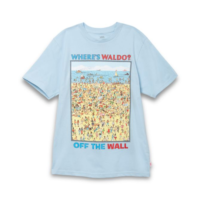 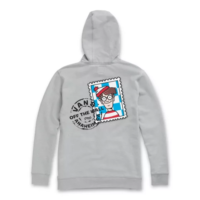 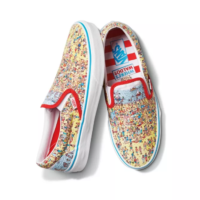 Vans also released their Sk8-hi with a black and yellow checkerboard covered fabric inspired by Waldo’s arch nemesis, his evil twin, Odlaw. Want to copy Waldo’s signature look? Vans got you covered with their Old Skool model decked out in Waldo’s red and white stripes with question mark-printed shoelaces.

For apparel they’ve released t-shirts, hoodies and hats in which Wizard Whitebeard makes an appearance aside a slew of hidden Waldo surprises and postage stamp designs.

We love that Vans put everyone’s favourite lost man in the spotlight because it leaves us longing for pre-social distance days when cluttered crowds of people clumped together wasn’t a forbidden happening. The prints used in this eccentric footwear and apparel line paying homage to Waldo, were either pulled from the classic books themselves or inspired by the ingenious drawings that took Where’s Waldo? creator, Martin Hardford up to 8 weeks to finish. Each scene from Where’s Waldo? has approximately 3000-4000 tiny figures.

“For over 30 years, the ‘Where’s Waldo?’ series has challenged children in the spirit of fun, teaching generations about attention to detail and instilling a love for travel and adventure,” says the official Vans press release.

Go ahead, put your eyes and mind to the ultimate test with these items from Vans which are available in toddler, kid and adult sizing – fun for the whole family! Shop online at www.vans.ca